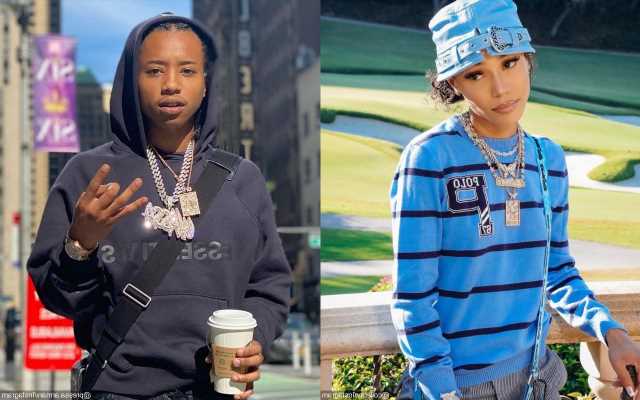 The daughter of Benzino raises people’s eyebrows after she declares her single status on her Twitter page, just four months after going public with the Toronto-born emcee.

AceShowbiz -Did Coi Leray and Pressa break up? The “No More Parties” raptress recently hinted that her relationship with the Toronto-born rapper is over as she described herself as a “single” woman.

The daughter of Benzino seemingly announced her split from the 25-year-old emcee via Twitter. “Single,” she wrote in a since-deleted tweet, before adding in another post, “If your n***a let’s you go to sleep mad every night, you need a new n***a.”

Coi confirmed her romance with Pressa, with whom she collaborated for “Attachments”, back in June. At that time, she treated her TikTok followers to some flirty videos. In one of the clips, she could be seen dancing to the music while wearing a black outfit.

The “420 London” spitter/singer, on the other hand, was seen placing his hands around the femcee’s body. At one point, she threw a seductive gaze at her beau, who responded with a huge smile.

Later that month, the 24-year-old hip-hop star fired back at online trolls saying that her boyfriend looked like a girl. Taking to her Twitter page, she argued, “People saying pressa look like a girl till they see that Mf d**k print.”

Before being an item with Pressa, Coi was linked romantically to rapper Blueface. When they were spotted having lunch at Harold’s Chicken in Hollywood together, the two got flirty. A source told TMZ that the two chowed down on a plate of chicken and enjoyed each other’s companion.

Prior to that, Coi dated Trippie Redd. Unfortunately, their romance ended with a messy breakup. In November 2019, the “Topanga” hitmaker threw a shade at his former girlfriend on “Leray”, a track of his album “A Love Letter to You 4”, for allegedly flirting with Lil Gotit.

Reacting to the song, Coi tweeted, “It was certainly a b***h move for Trip to go and name the song after me.” She further explained, “I heard all those songs 5 months ago. And he personally sent me Leray like a b***h and still puts it in his album.”