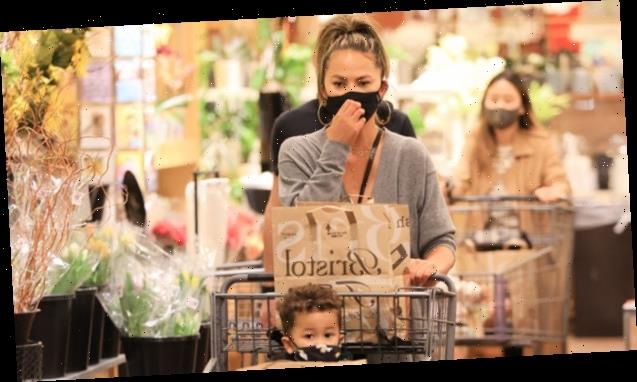 Chrissy Teigen and Miles had the cutest mother-son outing at a Bristol Farms grocery store on March 9.

Spotted at a Bristol Farms: Chrissy Teigen and her adorable four-year-old son, Miles Theordore Stephens. The mom-son duo was seen at the grocery store on March 9, where Miles got a free ride in a shopping cart while Chrissy pushed. They were of course wearing face masks; both opted for black face masks, but Miles’ mask had lightning bolts.

Chrissy looked casual yet chic for the errand run in a cozy grey ensemble, which she dressed up with a layering of necklaces, gold hoop earrings and bangles. Meanwhile, her mini me wore a fun green jumpsuit to help his mom stock up the groceries at their $17.5 million mansion.

That multi-million mansion — which Chrissy shares with her husband and Miles’ dad, John Legend — is the very same place where Chrissy recently threw a Hooters-themed birthday party for her stylist, Alana Van Deraa, who turned 28 years old. Chrissy decked out her living room with orange and white balloons and even transformed into a Hooters waitress to pay homage to the cheeky restaurant. It wasn’t Chrissy’s first time wearing the uniform!

“Back to my roots. was a hostess at the hoots! the shorts, they have changed!!!!,” Chrissy captioned a video of her owl-themed party outfit, which the Sports Illustrated Swimsuit Issue model posted to Instagram on March 5. No matter what she’s wearing, Chrissy’s always looking good (like when she rocked this blazer and bike shorts set that was styled by Alana).

Before Chrissy and Miles’ grocery run, the mother and son had another sweet bonding moment. On Jan. 10, Chrissy shared a clip of her second child cracking her up thanks to a spot-on impression of his uncle. “My guy is becoming funny despite john genes thank god,” Chrissy teased underneath the hilarious video. Chrissy’s always having a fun time with her kids Miles and Luna, 4!