Chrissy Teigen’s back, baby! A little under a month after leaving Twitter, Chrissy reactivated her account and is ready for some laughs again.

She just couldn’t stay away! Nearly one month after deactivating her Twitter account, Chrissy Teigen returned to the social media site to catch up with her online friends. “Turns out it feels TERRIBLE to silence yourself and also no longer enjoy belly chuckles randomly throughout the day and also lose like 2000 friends at once lol,” she tweeted on April 16.

“I choose to take the bad with the good!!” she added in a followup tweet. She joked that she “spent weeks just saying tweets to shampoo bottles” when a fan asked what she had been up to during her self-imposed hiatus. Chrissy made the decision to leave Twitter on March 24, citing the site’s “negativity” that left her “honestly deeply bruised.”

“It’s time for me to say goodbye,” Chrissy tweeted. “This no longer serves me as positively as it serves me negatively, and I think that’s the right time to call something. I’ve always been portrayed as the strong clap back girl but I’m just not. My desire to be liked and fear of pissing people off has made me somebody you didn’t sign up for, and a different human than I started out here as!” 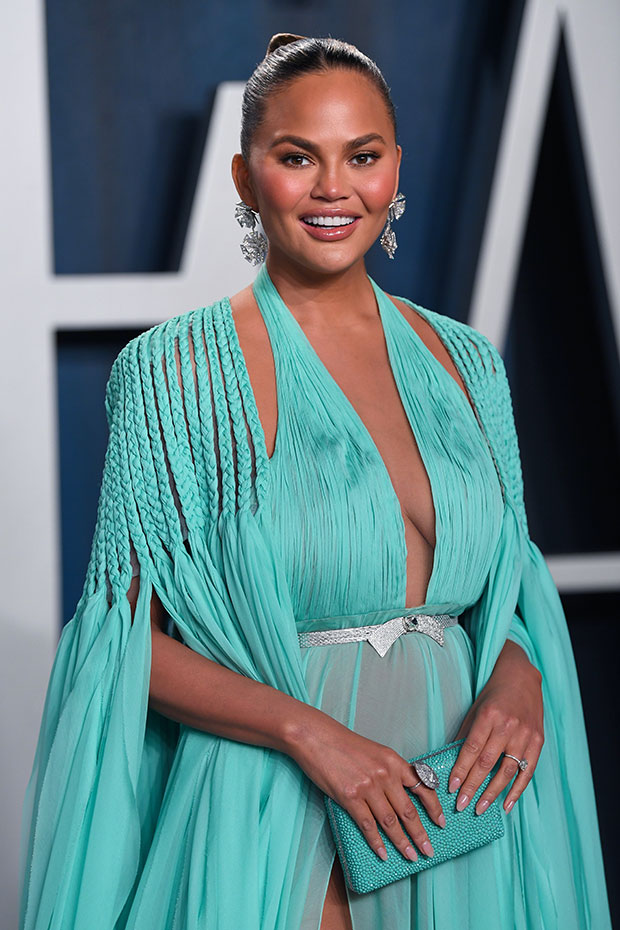 Fans loved Chrissy’s candid and often funny Twitter account. She used the account to document her October 2020 miscarriage, as well, sharing every step of the experience, including photos of her and husband John Legend‘s unborn son, Jack. Some criticized her, and Chrissy responded in a passionate Medium essay: “I cannot express how little I care that you hate the photos. How little I care that it’s something you wouldn’t have done.”

Chrissy confirmed her exit from Twitter in a March 25 Instagram post. “It’s not the platform. It’s not the ‘bullying’. And it’s not the trolls. The trolls I can deal with, although it weighs on you. It’s just me,” the Cravings author explained. “I have to come to terms with the fact some people aren’t gonna like me.

“I hate letting people down or upsetting people and I feel like I just did it over and over and over,” she continued. “Someone can’t read that they disappointed you in some way every single day, all day without physically absorbing that energy. I can feel it in my bones.”