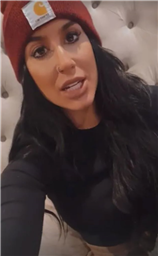 This might sound silly, but there are downsides to becoming rich and famous at an early age.

We’ve all seen it before:

A young celeb hits the big time in their teens or early twenties, and after that, the rest of their life simply can’t measure up.

This can lead to sad situations involving addiction, reckless spending, and other destructive behaviors.

But some of Chelsea Houska’s Instagram followers believe the star has taken the exact opposite approach to her post-peak boredom.

They believe Chelsea is giving in to what some call “toxic positivity.”

Interestingly, she walked away at the height of her career — if her social media following is any indication, Houska was the most popular Teen Mom in the franchise.

Her haters are convinced that Houska has devoted her post-MTV life to convincing everyone — including herself — that her quiet existence in South Dakota couldn’t be happier and that she doesn’t miss the spotlight even a little bit.

This belief is based on nothing but Chelsea’s Instagram posts, so obviously these people are stretching quite a bit.

According to their theory, the surest sign of Houska’s unhappiness is the amount of effort that she devotes to health and fitness.

Yeah, it’s pretty counter-intuitive, but it’s best not to try and understand the mindset of the devoted social media troll.

Earlier this week, Chelsea shared a post-workout pic to her Instagram Stories — and some of the commenters on Reddit believe she’s been hitting the gym too hard.

“I do worry about her because she does seem obsessed with staying thin and it alarmed me when she talked about making herself a separate dinner from the family,” one user wrote, referring to an earlier Story in which Chelsea detailed her diet plan.

“That sounds incredibly not healthy long-term.”

“So much about her screams that she has body image/self esteem issues,” a second person chimed in, according to UK tabloid The Sun.

“So many people on this sub hate the fact that she obviously has self esteem/body image issues and possibly an eating disorder,” a third person chimed in.

And it’s not just Chelsea’s workout routine that fans are taking issue with.

The former reality star has been accused of “blackfishing,” meaning that critics feel she’s been artificially darkening her skin with makeup or fake tan to the point that she’s guilty of cultural appropriation.

“Chelsea’s girls rocking their natural (albeit insta filtered) color. Meanwhile their Mom is 1,000 shades of mahogany,” a redditor wrote in response to one recent Story.

“If I didn’t know any better I’d think she adopted those kids lol. I don’t get why she wants to appear an entirely different race!” another added.

“It’s weird how people are coming to her defense about her way too dark makeup color/skin color. I guess it rubs me wrong when white girls try so hard to look brown,” a third observed.

Others were more sympathetic, with one commenter writing:

“I’m sure she’s a wonderful mother, she just has a ridiculous fake tan.”

And of course, there are still many who see Chelsea as an aspirational figure due to her commitment to fitness.

“She’s in crazy good shape, especially for having such young kids,” one person commented on Houska’s latest workout pics.

“She looks fantastic,” a second wrote.

“Hot damn she is getting fit,” another added.

But these days, she’s learning a hard lesson about fame:

You can walk away from the spotlight, but the haters will always know where to find you.