Britney Spears has reportedly unfollowed Jamie Lynn Spears—though it looks Jamie still follows her older sister. The move comes amid Britney calling out Jamie Lynn (and the rest of her family) in multiple social media posts for not being more supportive during her oppressive conservatorship. Back in July, Britney posted “I don’t like that my sister showed up at an awards show and performed MY SONGS to remixes !!!!! My so-called support system hurt me deeply !!!! This conservatorship killed my dreams … so all I have is hope and hope is the only thing in this world that is very hard to kill … yet people still try !!!!”

And in October, a source told E! News that “Britney is very, very angry and hurt. She feels like Jamie Lynn totally abandoned her and let her down in the fight of her life. They were best friends and everything to each other for so long. She asked for support, and feels like Jamie Lynn turned her back on her and couldn’t be bothered.” 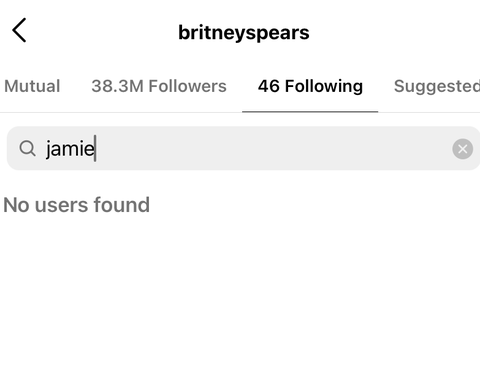 Jamie Lynn also got significant backlash for her upcoming memoir, which was originally titled I Must Confess, a clear reference to Britney’s single “…Baby One More Time.” The title was later changed to Things I Should Have Said.