via @jayfielden: As we speak, Quentin Tarantino’s ninth film, “Once Upon a Time in…Hollywood”—a magnum opus with a cast of casts—is debuting at Cannes. The movie, which is set in 1969, inspired us to collaborate with the director and his two leading men on a cover that captures the look and feel of the great Esquire covers of the same era. The entire issue, in fact, taps the Spirit of ‘69—the style, the vibe, even some of the magazine’s own history—to reflect, a half century later, on 2019. To get the special issue, you’ll have to wait for it to hit newsstands officially on June 4th. But to read @michael_hainey’s exclusive Q&A with @leonardodicaprio, Quentin Tarantino, and Brad Pitt, click the link in our bio. Casting by @emilypoenisch // photos by @alexilubomirski // styling by @matthew_marden // design by @raul_a_aguila // editing jeuje by @brucehandy // photo direction @justinoneill & @alixbcampbell // @sonypictures // @festivaldecannes

Leonardo DiCaprio, Brad Pitt and Quentin Tarantino cover the latest issue of Esquire, and it’s surprisingly good. As in, I was genuinely surprised by how much fun this was to read. The three men are all interviewed at the same time, around the same couch, as they talk about Once Upon a Time in Hollywood and their career journeys and what it all means. They gossip about what Hollywood was like in the ‘90s, and what it meant to work with Luke Perry (in one of his final roles in OUATIH), and how this is a movie about Hollywood. Leo and Brad have an easy sort of chemistry and it feels like they have a lot of respect for each other in general. You can read the full piece here. Some highlights:

Tarantino on OUATIH: “This film is the closest thing I’ve done to Pulp Fiction…[it’s] probably my most personal. I think of it like my memory piece. Alfonso [Cuarón] had Roma and Mexico City, 1970. I had L. A. and 1969. This is me. This is the year that formed me. I was six years old then. This is my world. And this is my love letter to L. A.”

Brad liked the dynamic between his character and Leo: “Doing this with Leo was really cool and a rare opportunity. Then there was just the whole thing, where we all grew up with the lore of the lead actor and his stuntman. That relationship and craft. I mean, there are epic stories of these duos: Burt Reynolds had Hal Needham. Steve McQueen had Bud Ekins. Kurt Russell had his guy. Harrison Ford had his. These guys were partners for decades. And it’s something that is not the same in our generation, as the pieces became more movable.

Brad on the youths: “The positive of the new landscape is you see more people getting opportunities. But I see something else happening with the younger generations. I was dismayed at how many twenty-year-olds have never seen Godfather, Cuckoo’s Nest, All the President’s Men—these films that are in the Bible to me. And they may not even get to see them. I’ve always believed every good film finds its eyes, inevitably. But there’s a shift in attention span. I’ve been hearing from newer generations that they’re used to something shorter, quicker, big jump, and get out. And the streaming services work that way; you can move on to the next one if you’re enticed. What I always loved about going to a cinema was letting something slowly unfold, and to luxuriate in that story and watch and see where it goes. I’m curious to see if that whole form of movie watching is just out the window with the younger generations. I don’t think so completely.

Brad’s tragic Hollywood story: “I remember back in the early days I hung out with Brandon Lee. He drove a hearse and lived in Echo Park. We went out one night and everyone else had peeled off, and we ended up back at his place and it was like six in the morning. A real, you know, drunk and stony night, and he proceeded that night to tell me how he thought he was going to die young like his dad. And I just chalked it up to, you know, stony 6:00 a.m. talk. Then he got The Crow the next year.

Leo’s tragic Hollywood story: “I have one. One of the most ominous and sad ones. I grew up revering River Phoenix as the great actor of my generation, and all I ever wanted was to have just an opportunity to shake his hand. And one night, at a party in Silver Lake, I saw him walk up a flight of stairs. It was almost like something you would see in Vertigo, because I saw there was something in his face, and I’d never met him—always wanted to meet him, always wanted to just have an encounter with him—and he was walking toward me and I kind of froze. And then the crowd got in my way, and I looked back and he was gone. I walked back up the stairs and back down, and I was like, “Where did he go?” And he was . . . on his way to the Viper Room. It was almost as if—I don’t know how to describe it, but it’s this existential thing where I felt like . . . he disappeared in front of my very eyes, and the tragedy that I felt afterward of having lost this great influence for me and all of my friends. The actor we all talked about. Just to be able to have that, always wanting to just—and I remember extending my hand out, and then . . . Two people came in front and then I looked back, and then he wasn’t there. [Pauses.] I actually flew later to New Orleans to meet about Interview with the Vampire to play the part Christian Slater ended up playing. [Phoenix had been cast in the role.]

Brad on getting to work with Burt Reynolds: “Well, you’ve gotta understand, for me, growing up in the Ozarks and watching Smokey and the Bandit, you know, he was the guy. Virile. Always had something sharp to say—funny as sh-t. A great dresser. Oh, man. And I had never met him, so being there with him reminded me of how much I enjoyed him as a kid. And then getting to spend those days with him in rehearsal, I was really touched by him.

Leo on Luke Perry: “And for that matter, you know, Luke Perry! [Perry plays Scott Lancer, another fictitious TV actor.] I remember my friend Vinny, who is in the film as well, we walked in and we both had this butterfly moment of like, “Oh my God, that’s Luke Perry over there!”

Brad on Luke: “That’s Luke f–king Perry!” We were like kids in the candy shop because I remember going to the studios and [Beverly Hills, 90210] was going on and he was that icon of coolness for us as teenagers. It was this strange burst of excitement that I had, to be able to act with him. Man, he was so incredibly humble and amazing and absolutely committed. He couldn’t have been a more friendly, wonderful guy to spend time with. I got to sit down and have some wonderful conversations with him. It was really special.

What they say about Luke is so nice, and it’s weird to think of Leo and Brad – who have been considered the “coolest” Hollywood guys for decades – geeking out about Luke Perry, but really – Luke was the model for their fame too. Both Brad and Leo (especially Leo) started out as that kind of Teen Beat coverboy with the hair and the sensitive misunderstood-outsider vibe. I also found their sad/weird Hollywood stories fascinating – I don’t know if Leo has ever told that story about River before? And I’ve never heard Brad speak about Brandon Lee either. 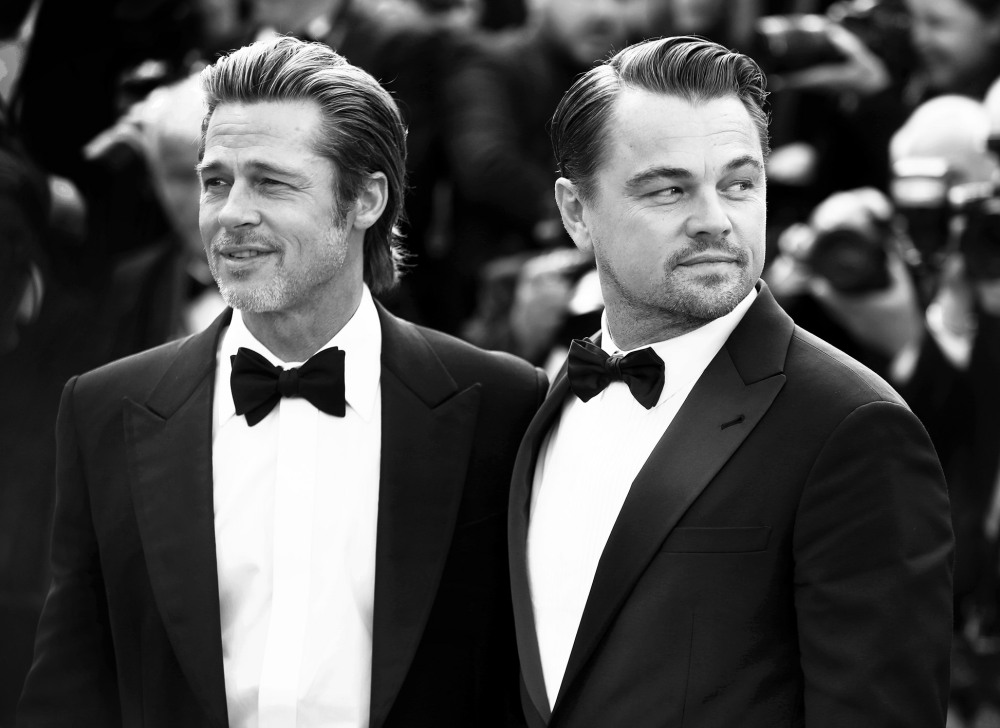