Mocking birds! From a pouting parrot to unlikely friendships these hilarious Snapchats prove feathered friends are the most underrated pets

A series of hilarious Snapchats featuring birds caught on camera have been shared online.

Bored Panda has collated an amusing photo gallery consisting of pictures which were sent in by people from across the globe.

From unlikely feathery friendships between birds and other household pets to another who took to a puddle like a duck to water when it couldn’t find the nearest pond, these funny images are sure to bring a smile to your face.

Another included an angry bird who stared through a stranger’s window as if he was going to murder his whole family. 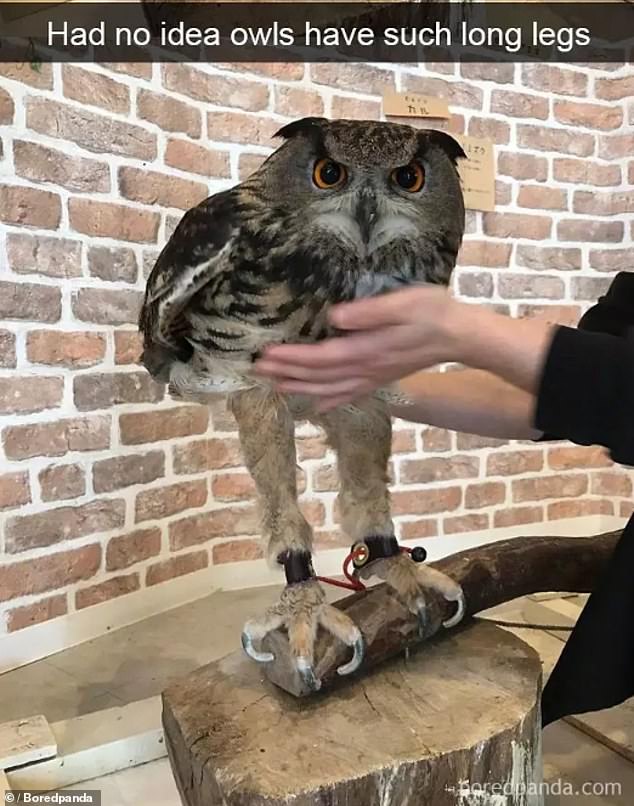 Strike a pose! One person was shocked to discover that this long-legged bird was model material – after her pins continued to extend 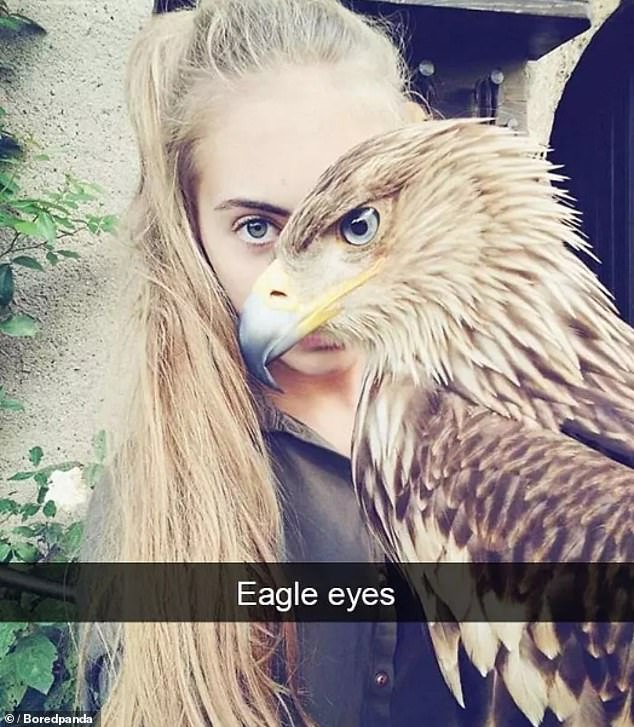 Eagle eyed! This lady got a bird’s eye view when she snapped this arty photograph on her camera phone 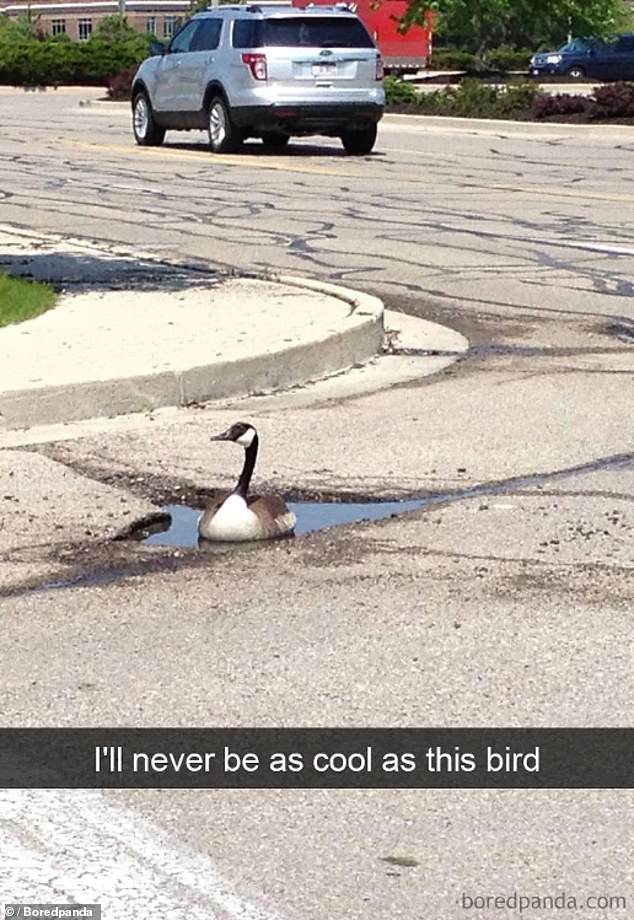 Like a duck to water! There may not have been a pond around, but that wasn’t a problem for this creative duck who waddled to the puddle instead 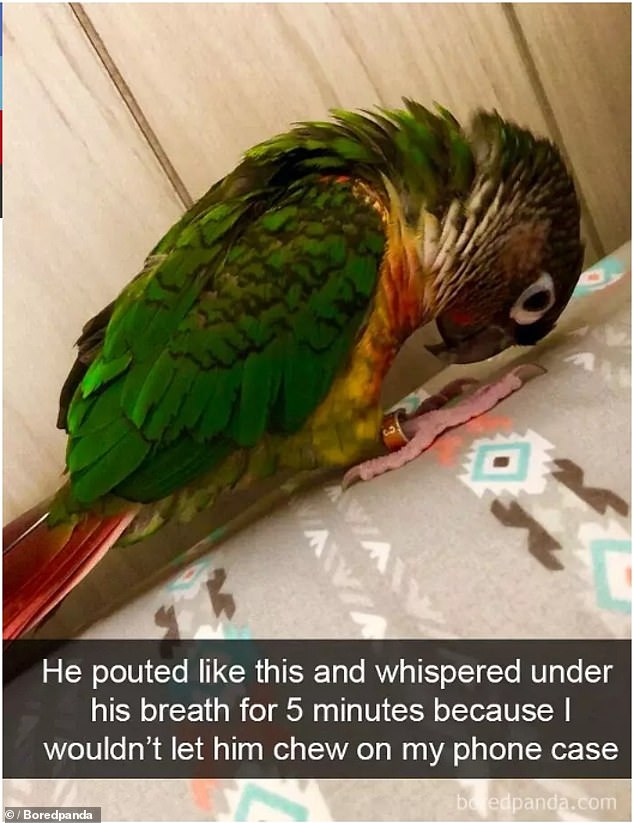 Rule the roost! This parrot pouted in the corner and whispered under his breath for five minutes because his owner wouldn’t let him on chew on his phone case 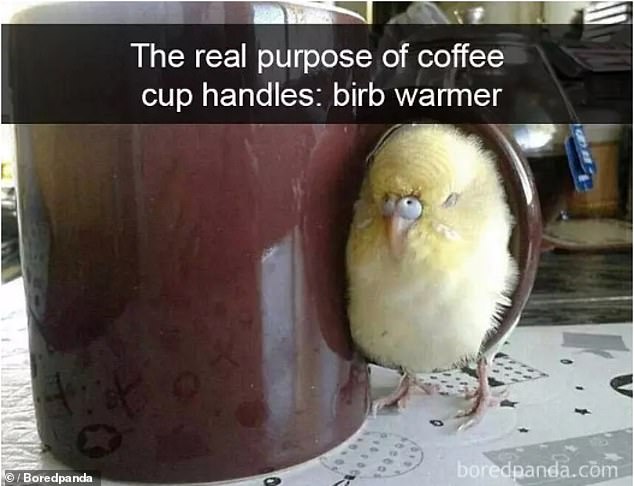 Mug shot! This adorable baby chick gave a whole new meaning to the term ‘hand warmer’ when he hopped inside the handle 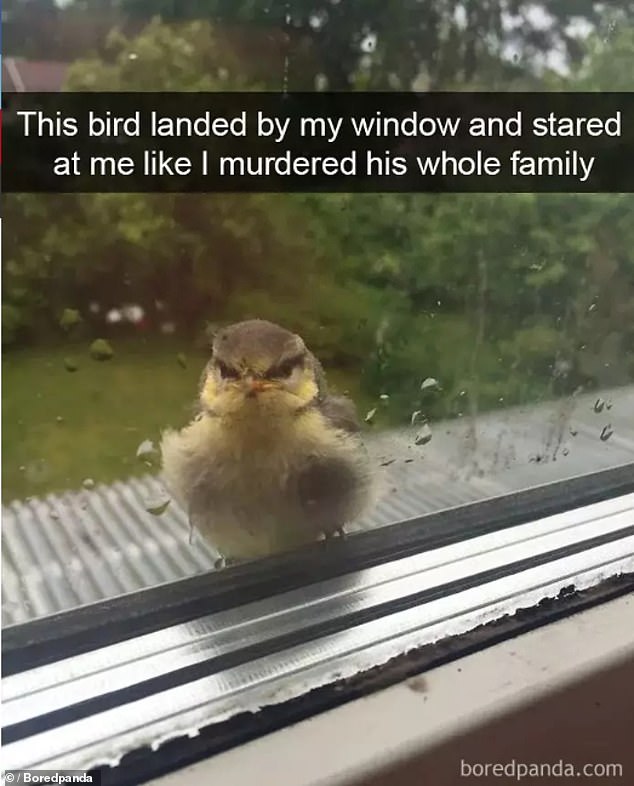 Angry bird! This yellow and brown chick landed on a random person’s window, and by the look on his face, someone seems to have ruffled his feathers 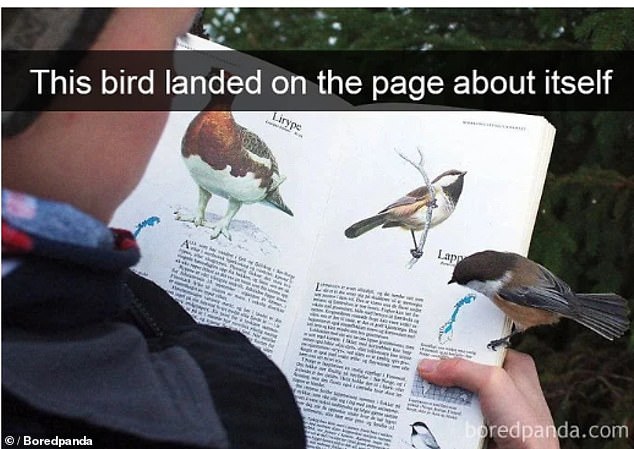 Book worm! This bird thought the novel was a real page turner – but that may have been because he was the specialist subject 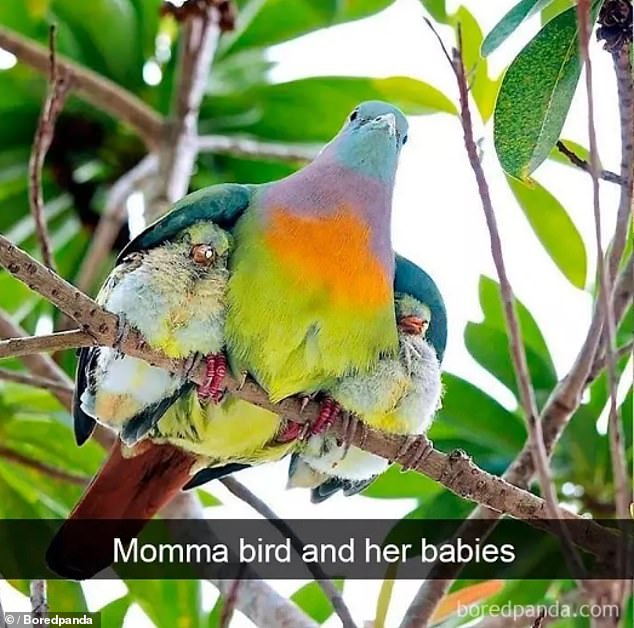 A bird in the hand! This mummy bird has got her two babies right where she wants them – under her wing 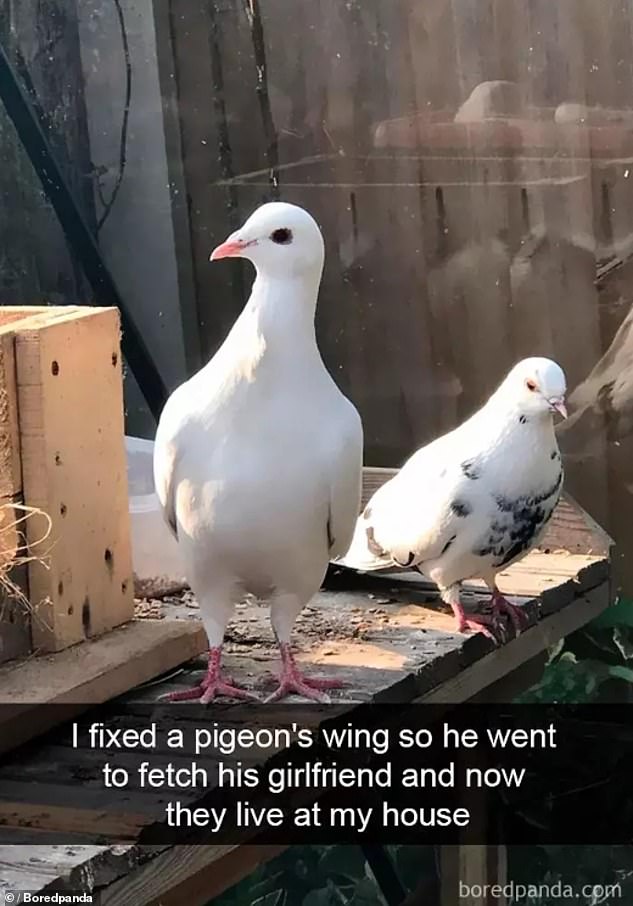 Home bird! This white and grey pigeon was so delighted when his wing was fixed, that he decided to set up home in his garden – and brought his girlfriend along, too 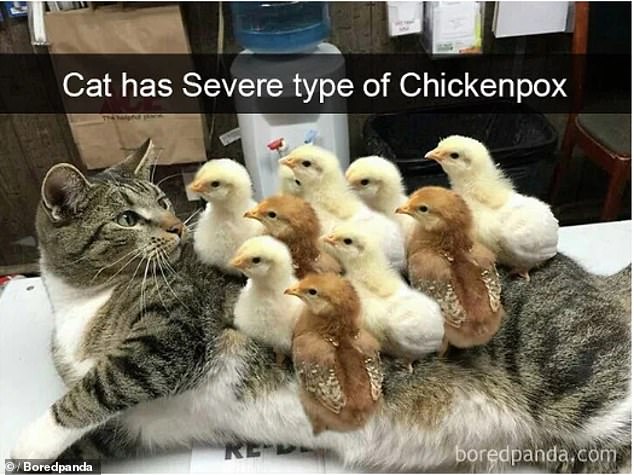 Chicken pox! A cat owner captured the moment her pet made unlikely feathery friendships with a whole group of birds 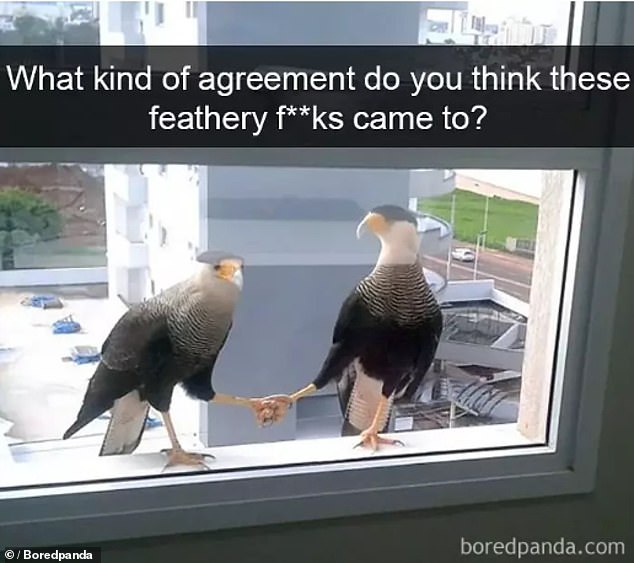 It’s a deal! These two feathery birds seem to be up to no good as this homeowner caught them shaking feet 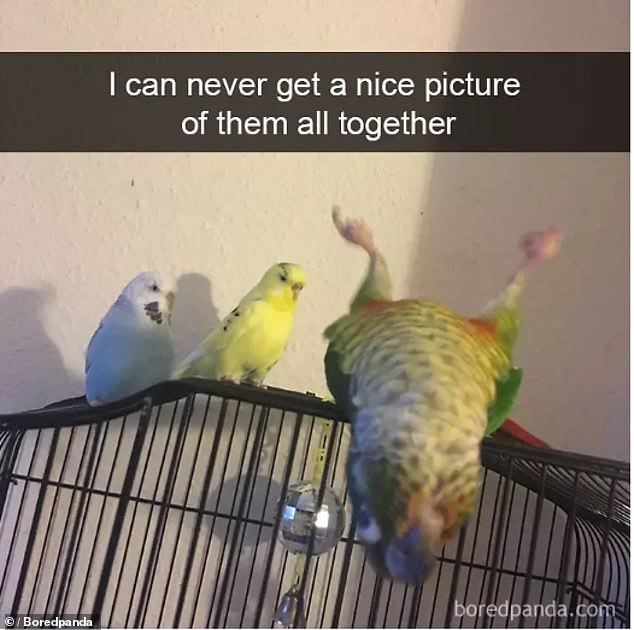 Feeling cagey! This bird lover was gutted that she wasn’t able to get a nice picture of her pets all together – yet again 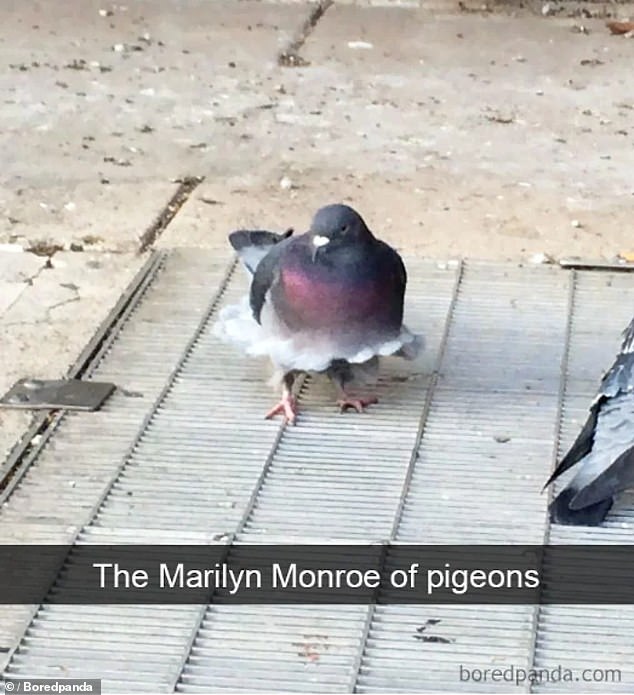 Birds of a feather! This pigeon was dressed to impress as she imitated the look of her favourite icon – Marilyn Monroe 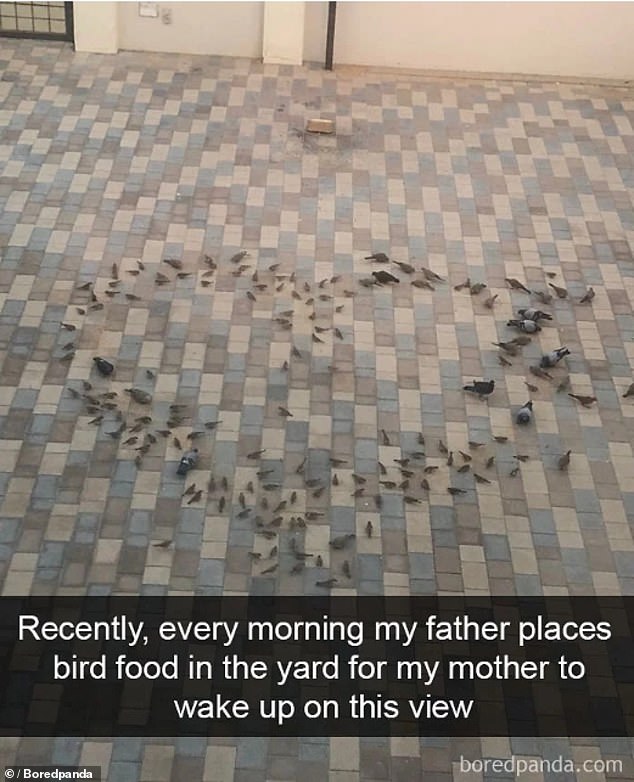 Love birds! One romantic man places bird food outside the house so that when his wife wakes up, she’s greeted with a heart 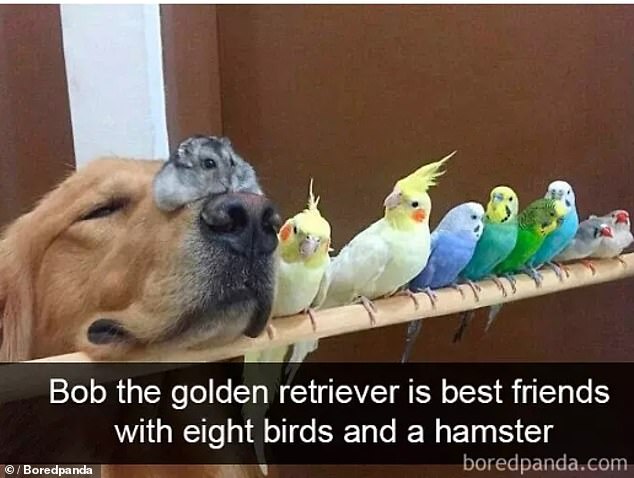 Furry friends! This sociable golden retriever has a long line of friends – including eight birds and even a hamster