Diana Silvers is poised in front of a vanity mirror with her phone in hand. She and I have just moved a series of bags holding the door open, and before sitting down again, she peeks at a notification on her screen. "You ever feel like when your phone lights up, you want it to be one person to text you even though you know they’re literally never going to text you?" she asks, placing down the phone. "But you’re like, ‘Maybe this will be the day they text me!’" Booksmart and Ma‘s Diana Silvers may not have the frequent contacts she wants, but right now, she seems to be doing just fine. After all, she is starring in two of the early summer’s buzziest films.

Silvers’ work as edgy loner Hope in Booksmart has garnered attention for depicting a painfully real same-sex hookup, while she stars as new kid Maggie opposite titular actor Octavia Spencer in the psychological horror movie Ma. But acting wasn’t always the case for Silvers. The 21-year-old began her professional career as a model back when she was 17. She took the gig to make ends meet while she studied acting at New York University.

"I’m about to start school in New York at a very expensive private institution, I have lots of siblings, I don’t know how I’m gonna afford this, so modeling — let’s do this thing," Silvers says describing the reasoning behind the decision. Her modeling rep’s partnership with a Hollywood talent agency gave her hopes that acting jobs would soon follow, but it was a long chain of events that included working with Academy Award winner Spencer that finally landed her an official slot at the talent agency. 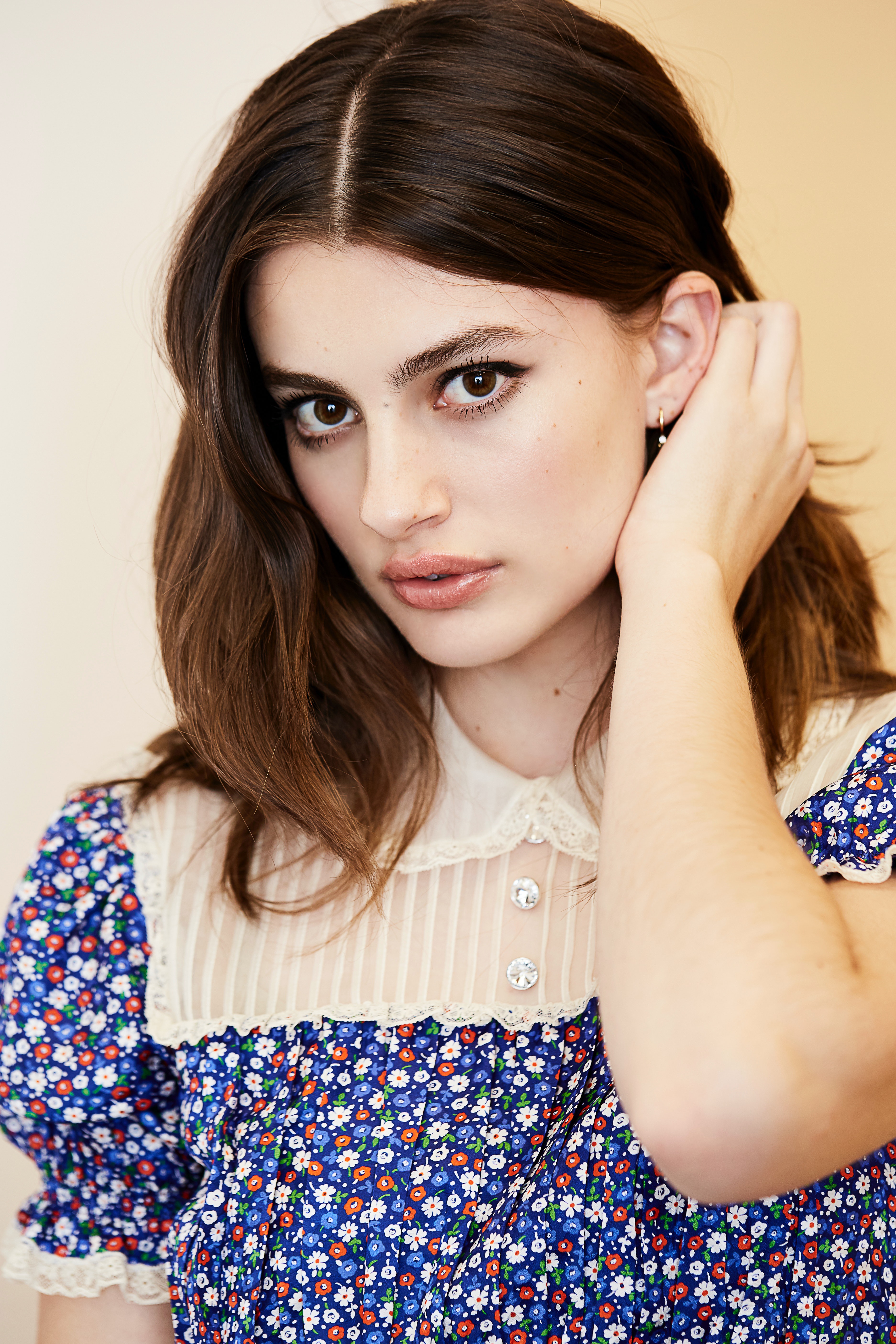 "I don’t think I was ever really an established model," she says, perched on a couch in a short, floral dress reminiscent of the mod movement. "I did my first American Vogue as an actress, I did my first French Vogue as an actress. I felt it was always like, ‘Who’s that girl?’ because I’ve always felt that there’s so much more going on inside me with what I can offer past just me standing there, looking pretty."

It’s toward the end of Silvers’ final press day for Ma when we speak, but apart from her occasional apologies for trailing off with thoughts, I can’t sense her tiredness. She talks with her hands and widens her heavily-lined eyes throughout the conversation, radiating the vibe of a passionate college student who feels particularly struck by the assigned reading. Instead of The Catcher in the Rye or The Great Gatsby, that inspirational reading was most recently her script for Ma, which hit theaters on May 31.

"My script had different color codes with different types of sticky notes with different kinds of questions I would ask [director] Tate [Taylor]," Silvers says. "I’m like that with every script. I have all these questions and I’m such a nerd and I do all the research and I’m so excited to be there."

With Booksmart and Ma under her belt and an upcoming role in the thriller Eve, Silvers has definitely proven that doing her homework paid off. "It’s fun to play with the psychology of anything," she says. "That’s what acting is — getting into people’s different psychologies and understanding the person to their core." 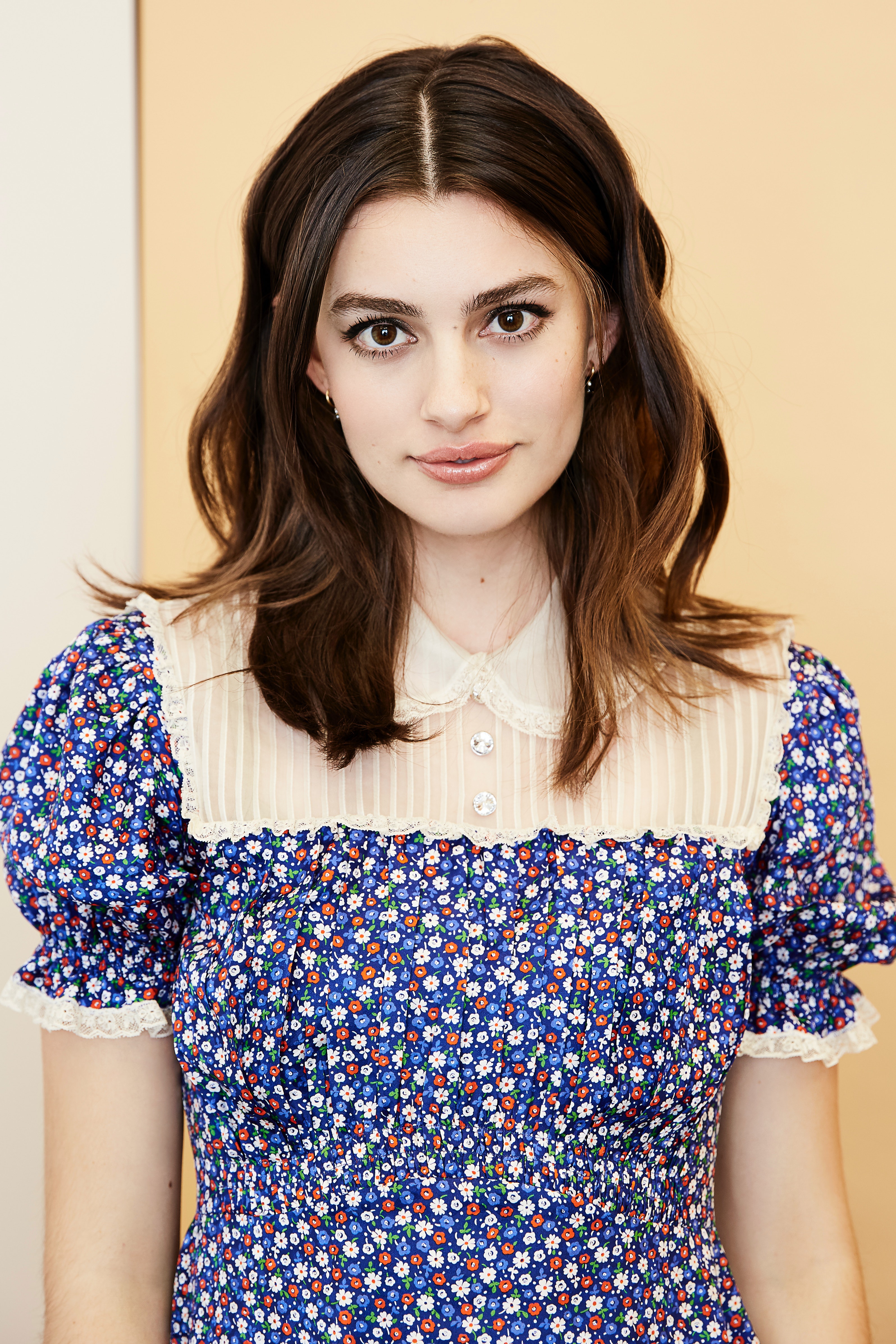 It’s also clear that she’s as much of a fan of movies and onscreen stories as she is a participant in them. She discusses the John Hughes canon ("Ferris Bueller’s Day Off is fun, but I just thought that the Breakfast Club characters were so one-sided") and sings her praises for The Perks of Being a Wallflower, Almost Famous, and Lady Bird. Silvers is also quick to support her co-stars, regardless of whether they are new or established in the entertainment industry.

For now, Silvers is accustomed to playing high school students, but her two most recent roles capture what she calls "very opposite spectrums of teenage girlhood." Although Hope only appears in a handful of Booksmart scenes, her cool, lofty persona cracks when her attempt at sex with Kaitlyn Dever’s Amy ends on an awkward note. Still, the relatable approach to the scene and the film’s casual treatment of Amy’s sexuality has kept fans talking online.

"I literally have goosebumps," Silvers says, showing me her arm as she recalls the DMs she’s received from LGBTQIA+ teens who felt encouraged to come out after seeing the film. "I can’t believe this movie’s impacting young people so much that they have the courage or the strength to just be who they are and just live their truth. The fact that my three minutes in Booksmart is doing that, it’s the best feeling in the world and something I’m never gonna forget." 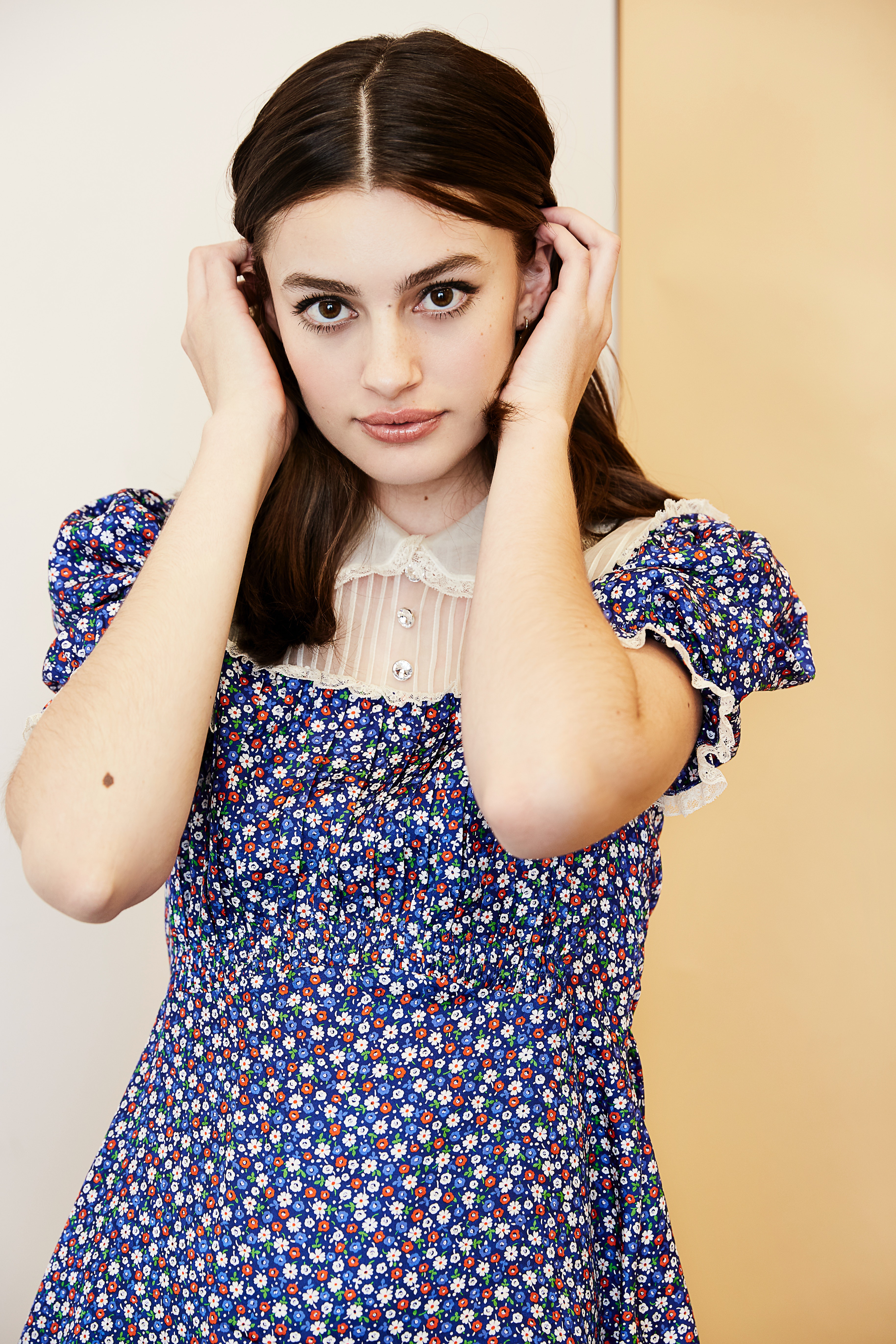 After Booksmart‘s release, Silvers stepped directly into the spotlight for Ma and her role as Maggie, a teen forced to return to her mother’s hometown after her parents’ divorce. Quickly falling into a new group of friends, Maggie and her peers soon meet Spencer’s Sue Ann, who agrees to buy them alcohol and let them hang out in her basement. Their relationship with Sue Ann, or Ma, turns concerning when her attitude toward their partying becomes a little too demanding and possessive.

"I was more like Hope in the sense that I was a loner," Silvers says about her characters. "I think there’s a hybrid where I wanted to be liked but not so much that I would go to the parties and prove that I could hang. It’s sometimes cathartic to play a character and express certain emotions and aspects of what I wish I had explored more at that stage of my life. Especially with Maggie, I got to go to the parties and see what that was about, and I was like, ‘Actually, it’s really good that I didn’t, because nothing’s even that great.’"

Both films explore women’s takes on their high school years, and while Silvers may have second chances at her teenage experience through work, she isn’t one to relish in this déjà vu. She laughs over the memory of a boy who decided against asking her to prom and later regretted his decision when he saw Booksmart, but other than reminiscing, she likes to look forward. 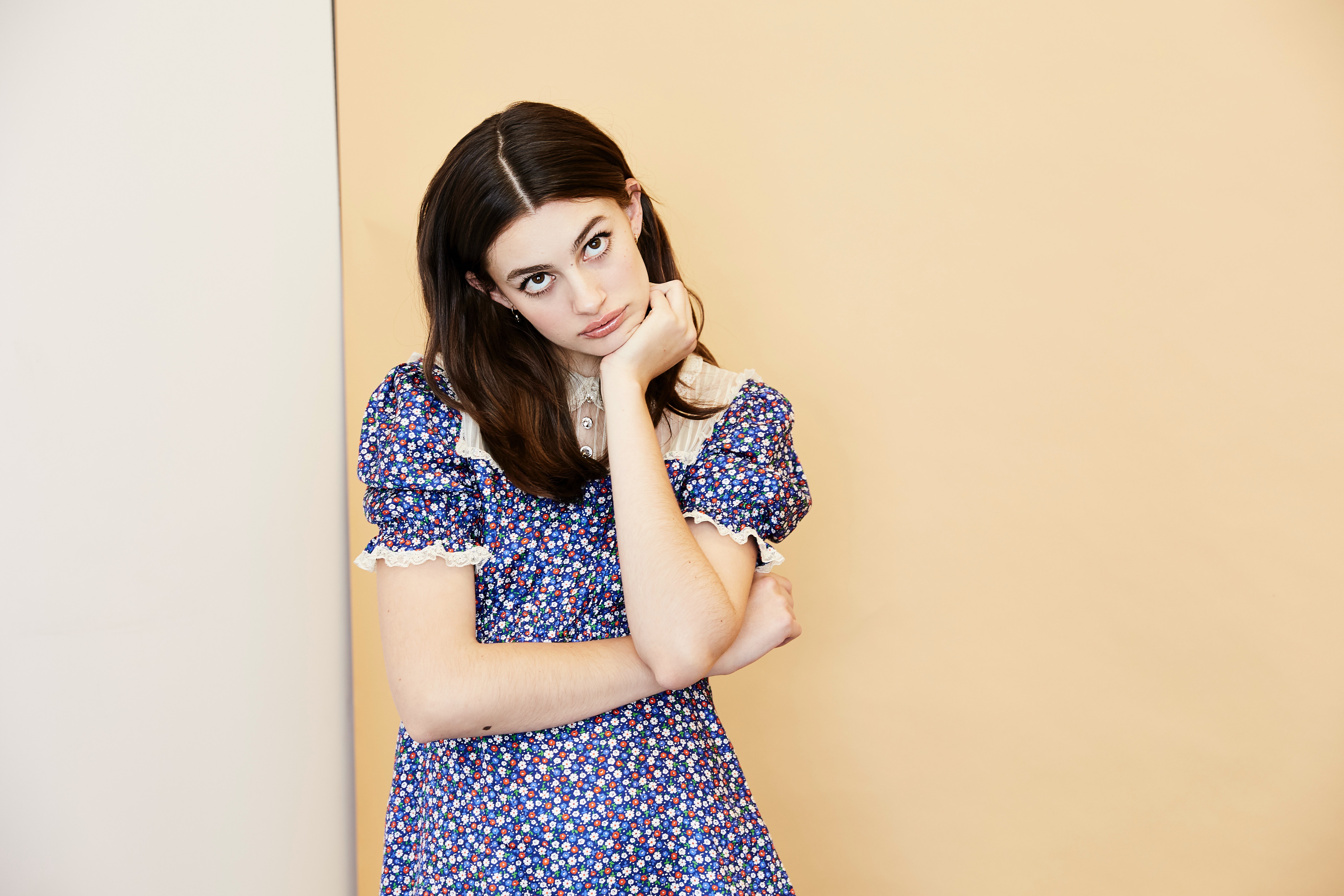 The years ahead also promise a shift in the kind of content that emerges from Hollywood. While Booksmart was a female-led buddy comedy with a female director, Ma joins a rising number of horror films with black leads. Silvers is particularly excited for a greater focus on well-rounded women in TV and movies.

"The female gaze is a very intimate one that has less to do, I think, with being sexy and more about being real," she says. "And that’s not to say those things don’t go hand in hand — they can and they do. But for the most part, as we see in Booksmart, that scene is so honest and so raw and so real. When you’re watching it, or at least when I watch it, I’m not like, ‘Wow, they’re so hot,’ you know? It’s like, no, they’re just real and they’re figuring out what is going on here. I think at the end of the day, it’s just about equal opportunity."

As her acting resume grows in response to this emphasis on equality, Silvers has her own ideas of how to guide her career in the right direction. She has written a short film that she may star in or direct, and she’s still going to auditions. "I’m excited to be in the industry at this point and to be starting in this kind of climate," she says. "It’s just one day at a time. I hope I get to do it all."