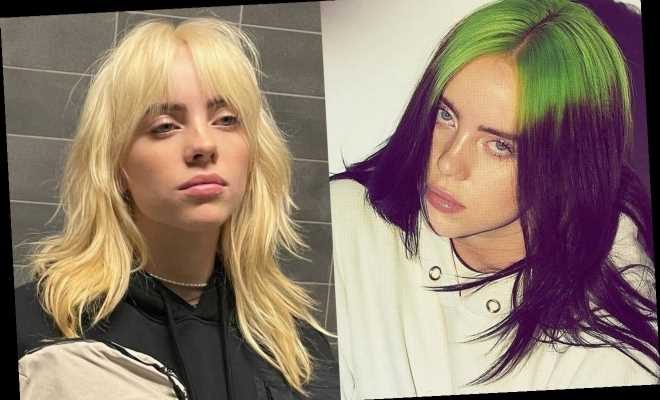 The ‘Bad Guy’ hitmaker reveals she had to wear wig for two months during her hair transformation while her hairstylist claims the makeover took six weeks to complete.

AceShowbiz –Billie Eilish wore a wig “for weeks” to hide the transformation of her black and green hair to blonde.

The “Bad Guy” star stunned fans when she revealed her newly-lightened locks on her Instagram page on Wednesday (17Mar21), with the picture breaking the Instagram record for the quickest snap to reach a million likes on the social media site.

But in a subsequent post, which has since been deleted, Billie’s hairstylist Lissa Renn revealed the makeover took six weeks.

“The process is real when you’re doing it right. 6 weeks to get all the black of her ends without damaging it, along with her following my strict haircare regime. We actually loved all the stages of lifting the colour too but the end result is (fire emoji).”

Billie then took to her TikTok page to address fans’ theories that she had been wearing a wig to the recent Grammy Awards, sharing a video of herself lifting up the black and green hairpiece at the front to reveal her blonde locks beneath.

In the comments, the singer revealed that she had been so dedicated to the hair transformation that she had donned a wig for “like two months.”

Before going blonde, Billie Eilish was known for her signature black and neon green highlights.

Late last year, she revealed her plan to change her hair color ahead of the release of her documentary “Billie Eilish: The World’s a Little Blurry“.

“I’m changing it after the doc comes out,” the Grammy-winning singer/songwriter told her online devotees. “It’ll be the end of an era. I’m gonna give you a new era.”