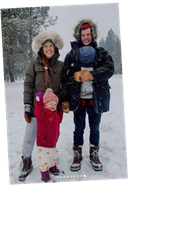 Audrey Roloff knows what people are saying about her.

She knows that, for a long while now, it’s been pretty darn negative.

Sometimes, the hate is for legitimate reasons — such as Audrey’s view on gay marriage.

And sometimes it is not — such as the overreaction to Audrey skiing last month while having her baby son strapped to her chest.

Overall, however, Audrey Roloff is not a very popular presence on the Internet and, like we said above, the former reality star knows it.

On her Instagram Stories account this past Tuesday, the mother of two was asked whether online trolls bother here and she gave a pretty candid response.

Not always, Audrey said. Not usually.

But sometimes? Of course. How could they not?!?

“I’m honestly pretty good at brushing them off,” Audrey said to open her reply, adding:

“Realizing they don’t have context and that I don’t have to defend every accusation made against me helps and is freeing.”

“I’m also reminded that ‘hurt people hurt people.’ But I can’t say I’m never [affected]. I am human just like you and people say some pretty sh**** things.”

This quasi clapback at the haters comes after she Roloff trashed by social media user for letting her daughter ski in the middle of a blizzard.

On Saturday, Audrey shared a clip of herself, her husband and her kids as they drove in their car down a mountain.

“Ember girl and I skied in a very stormy storm up there. There was lots of winds. Right, Ember? Mommy had to protect you.”

Ember added it was “so scary out there,” prompting Audrey to confirm her daughter’s analysis and to add:

“It was a little bit scary out there, but we were brave.”

Naturally, a bunch of strangers jumped all over Audrey for placing her young daughter in a dangerous situation.

Screamed one critic, for example:

“Wtf… being outside of your comfort zone helps you adapt. Being in unnecessary and dangerous conditions helps you land in the ER.”

“This child is 3 years old!! She doesn’t need to learn yet about adapting and learning you’re not always in control. Let the kid wear neon and watch some Paw Patrol, my god.”

Did Audrey deserve all this vitriol?

It’s hard to say and we’d rather not judge. We don’t doubt for a second that Audrey and Jeremy love their son and daughter.

But for promoting her dumb book amid an insurrection against the U.S. Capitol?

For acting like a total know-it-all who believes her stances on love and relationships are the only acceptable ones?

By all means, folks, let Audrey have it in those cases.

Let us not forget:

This is someone who openly shilled for a line of essential oils… while her state burned around her.