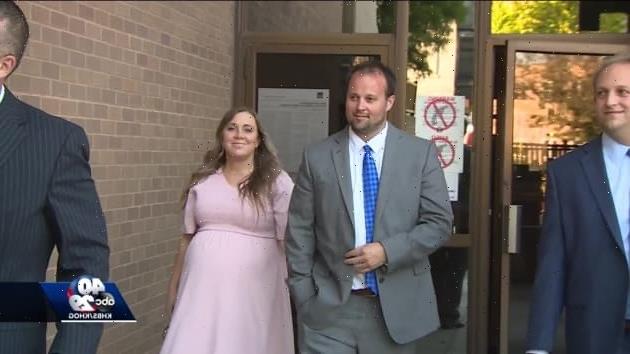 This was an awkward time for Josh and Anna Duggar to welcome their seventh child.

There’s no “good” time to be born into an abusive cult, but Madyson Lily Duggar was born just over a month before Josh goes to trial.

Speaking of awkardness … what is with her name?

Why did the guy who famously cheated using an adultery website go on to have a daughter seemingly named after it?

2015 was the year that Josh was revealed to be a confessed child-molester.

That same year, he was exposed in the massive and infamous hack of Ashley Madison, a dating site for married partners to cheat.

Cheating is bad in any relationship. In the Duggar world, it’s a little bit different.

In Josh’s twisted family, his 2015 scandal was less about wronging his wife or preying upon his sisters than it was about breaking strict rules about sex.

His family, church, and cult have no real concept of sexual consent as far as women are concerned.

But things like pornography are seen as fiendish horrors leading people astray. It’s all pretty backwards.

Tragically, reports indicate that sex crimes committed against young girls in the IBLP world are not all that uncommon.

They’re covered up and kept quiet, but they happen.

Josh’s Ashley Madison scandal, on the other hand, was entirely different.

For Duggar fans and critics alike, Ashley Madison is a name that they cannot forget.

The people who find it even more memorable are those whose spouses cheated on them using the site.

It is difficult to imagine a parent who has cheated or been cheated upon via that site naming their child Ashley or Madison.

And yet that is what Josh and Anna did with Madyson Lily.

Madyson isn’t quite the same as Madison, but … we’re talking one letter of difference and the exact same pronunciation.

Since Anna shared the name of their seventh child, the Duggar world has been abuzz with confusion.

“What in the self-flagellation, Anna?” asked one redditor, knowing that she would never see the question.

“I’d rather be mauled to death by a polar bear than name my baby after anything associated with an affair,” the commenter added.

It is difficult to fathom.

“Also, there are 14 billion people in their extended family,” a Reddit user quipped.

The commenter marveled: “no one looked at her and said ‘Girl, nuh uh, we cannot let you do something so ridiculously idiotic?'”

Others delved into the question of how the name was brought up, and by whom.

“Can you IMAGINE Josh being the one to bring up ‘Madyson?’ Can you f–king imagine?” another redditor mused.

“And if she did — after all he put her through with a site by the same name…” the commenter continued.

Let’s look at the possibilities, because there are only a few.

The first is that it’s a total coincidence, that neither Anna nor Josh even thought of Ashley Madison when naming Madyson.

Unlike Duggar offspring, that is difficult to conceive … and if true, would speak to the depths of their denial.

What if Josh really suggested the name?

Whether it was an effort to alter search results, a whim, or an effort to test Anna’s commitment, it would be downright cruel.

Perhaps he wanted to leave one more indelible mark on his family before he (one hopes) spends many years behind bars.

What if it was not Josh, but Anna, who suggested the name?

We all know that Duggar women make limited choices within the cult, but it’s possible.

It could have been a demonstration of her unwavering loyalty to Josh … perhaps even a giant F-you to anyone suggesting that they split.

We cannot know the rationale behind burdening Madyson with that name.

Honestly, trying to follow the “logic” of Josh, Anna, or other members of their twisted cult is enough to drive someone mad. Don’t try it.

Instead, we can just feel a lot of sympathy for Madyson and her siblings, for a lot of reasons.