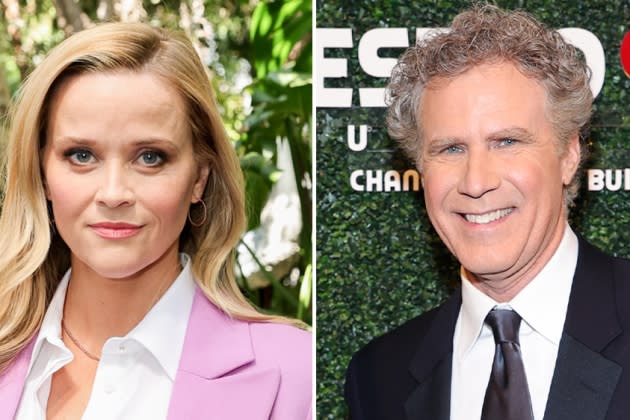 Reese Witherspoon and Will Ferrell are headed to the altar in a new wedding comedy for Amazon Studios.

Amazon has landed rights to the untitled movie, from writer-director Nick Stoller, in which Witherspoon and Ferrell will star and produce under their respective banners. Jessica Elbaum and Ferrell will produce for Gloria Sanchez, with Witherspoon and Lauren Neustadter producing for Hello Sunshine and the company’s Ashley Strumwasser serving as executive producer. Stoller — whose highly anticipated gay rom-com “Bros,” which he directed and co-wrote with star Billy Eichner, is due out Sep. 30 — will also produce for his Stoller Global Solutions alongside Conor Welch.

While details of the movie’s plot are still being kept under wraps, the premise reportedly involves two weddings that are booked at the same venue on the same weekend.

Sources say Amazon landed the rights to the project in a highly competitive situation with bids coming from both streamers and studios, which is logical given Witherspoon, Ferrell and Stoller’s stellar comedy resumes. To note, Hello Sunshine also has a number of high-profile projects in the works at Amazon, including the musical drama series “Daisy Jones & The Six,” starring Riley Keough and Sam Claflin, and the holiday romantic comedy “Something From Tiffany’s,” starring and executive produced by Zoey Deutch. After starring in hit dramas “Big Little Lies,” “Little Fires Everywhere” and “The Morning Show,” Witherspoon is set to return to her “rom-com roots” with the upcoming “Your Place or Mine” at Netflix.

Among Gloria Sanchez’s recent successes are “Eurovision,” in which Ferrell starred opposite Rachel McAdams, “Barb & Star Go to Vista Del Mar,” “Hustlers” and “Booksmart.” The company also has two multi-year first-look deals: one in television with Netflix, which came on the heels of the Emmy-nominated series “Dead to Me,” which will soon debut its third and final season; and a film deal at 20th Century Studios. Ferrell will next be seen in the Christmas musical “Spirited,” opposite Ryan Reynolds, which the company also produced for Apple TV+.

In addition to the buzz for “Bros,” Stoller has also helmed such critical and commercial hits as “Forgetting Sarah Marshall” and the “Neighbors” movies, with recent screenwriting credits on “Zoolander 2,” “The Muppets” and its sequel “Muppets Most Wanted,” and “Dora and the Lost City of Gold.” Stoller is currently in production on the Apple TV+ series “Platonic,” which he co-created and is co-showrunning alongside his wife, Francesca Delbanco, and where he reunites with “Neighbors” stars Seth Rogen and Rose Byrne. Most recently, his Stoller Global Solutions company renewed an overall deal with Sony Pictures Television.

The Hollywood Reporter was first to report news of Amazon nabbing rights to the hot project.