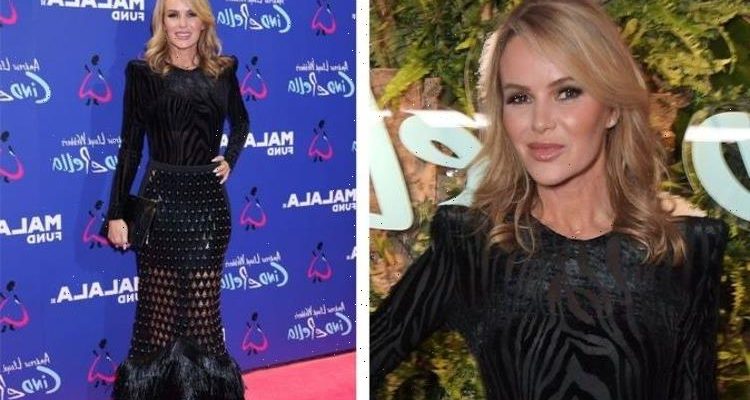 The attention-grabbing dress code was defined as “red carpet ready” and a sensational looking Amanda Holden didn’t disappoint in her interpretation of it. Donning an eye-popping sheer black tiger print dress, the 50-year-old actress and Heart FM presenter flashed onlookers a tantalising glimpse of her bra beneath.

Amanda loves to take risks and be adventurous

She layered the piece with a sensational black maxi skirt covered in gold embellishments over the top, while a feathery fringed hem at the ankle completed the picture.

Finally, she accessorised the chic outfit with an onyx snakeskin clutch and a pair of Yves Saint Laurent strappy sandals.

Amanda, together with fellow celebrities including Robbie William’s wife Ayda Field, was stepping out on behalf of the Malala Fund.

Malala Yousafzai, the child campaigner who risked her life in Pakistan to demand the right for females to have an education, was shot in the head on a school bus a decade ago and has since relocated to England, where she took up a place at Oxford University.

Together with Lord Andrew Lloyd Webber, the pair hosted a special performance of Cinderella, raising awareness for Malala’s charity, which supports education, empowerment and equality for women and girls around the world.

Every penny raised from the gala has been promised to the fund to improve the lives of struggling women.

The fund stated: “With the backdrop of a worsening global refugee crisis, which has interrupted the education of millions of young women, Malala Fund wants those who have lost everything to retain access to the opportunities they need to build a better future.”

Malala gave a statement saying that since age 10, she had been fighting for a world where “every girl can learn and lead”.

The event, which took place at the Gillian Lynne theatre in London’s Holborn, was a perfect fit for Amanda, as in the past she has been a Cinderella star herself.

Back in 2016, she joined a run at the London Palladium in which she performed as Cinderella’s sparkly fairy godmother.

The Britain’s Got Talent star only took on the role for five weeks, but she described it as an “absolute honour”.

She had laughed at the time: “I’m very excited but nothing like my two girls who can’t wait to watch their Mama fly!”

Of course, last night, her chic tiger-themed ensemble was a million miles away from the ultra-girly fluffy tutus she wore to channel the fairy godmother, but the look gave a nod to modern empowerment.

Stylist Karl Willett, who has also dressed celebrities including Jessie J, Alesha Dixon and Paloma Faith, was perhaps her own personal fairy godmother on the night, as he provided her with the sensational look she needed to head for the ball.

The look proved sexier than a recent costume he provided when, alongside former Pussycat Doll Ashley Roberts, she dressed in the guise of an elf.

Karl, who has been dressing her for years, including in her pivotal Britain’s Got Talent live show days, has revealed an excellent working relationship between the pair.

He told Hello! magazine that she was not just a “dream client”, but also a close friend.

“She loves to take risks and be adventurous,” he had explained.

“Her approach to fashion and style is exciting for me – she is open to experiment and push the boundaries of previous years.”

Amanda’s Cinderella gala event looks to be no exception.