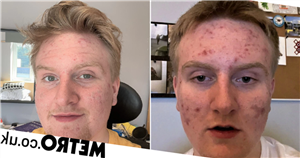 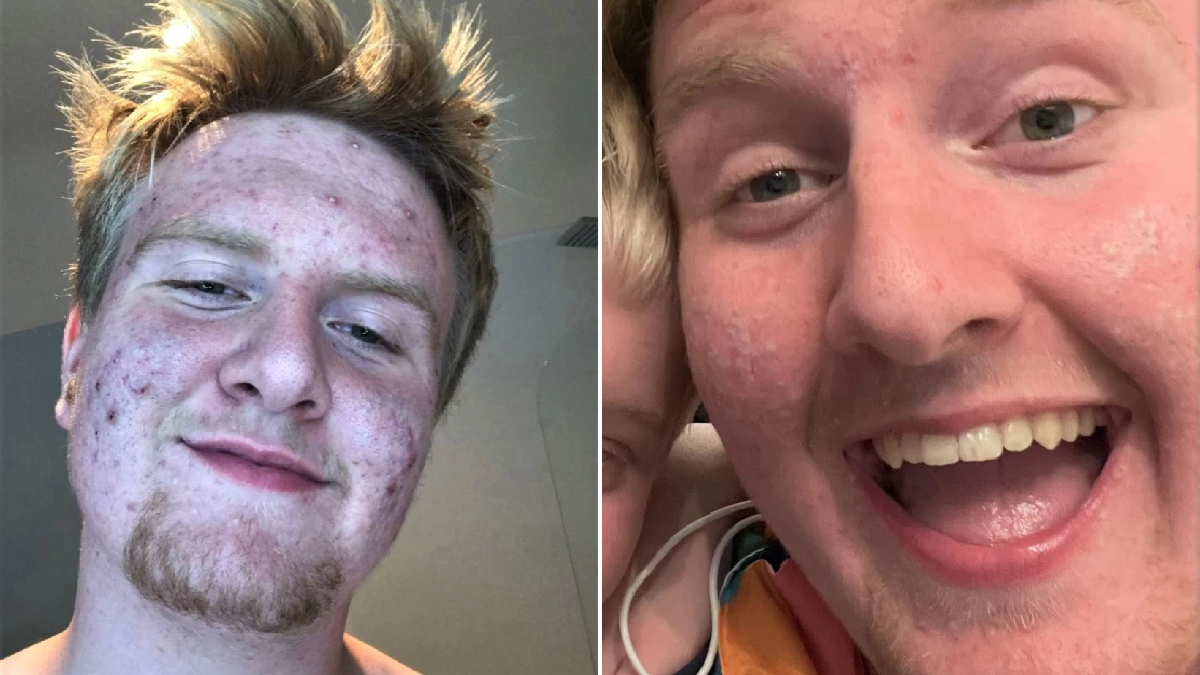 Pretty much everyone will get a pimple at some point, but cystic acne is different to the odd zit.

The spots with cystic acne are called nodules or sebaceous cysts, and start deep in the skin making them far more painful and causing scars in many people.

16-year-old Jude Smith has this severe form of acne, which he says led to bullying and self esteem issues.

The Sheffield student said: ‘My acne honestly caused me a lot of anxiety. It would get painful and then on top of that I’d get a lot of flack at school. Just your everyday “pizza-face” sort of thing.

‘I’ve always struggled with my image – I’ve always been plus-sized and that’s quite a big thing (no pun intended) to deal with socially already, so acne just loaded up the anxiety.

‘But when it comes to acne, more than size, people make really unkind comments. They would call me disgusting. Even some of my closest friends made fun of me.’

He added: ‘Worse than the flack though was the pain. Cystic acne means you get large spots that are particularly nasty and stay for a while.

Whenever I tried to wash my face or applied any sort of pressure, the cysts would bleed and it could get excruciating.’

With his spots initially developing at just 10 years old, Jude has tried a number of different products to soothe his skin.

From creams he was advertised online that promised ‘miracles’, to high street products aimed at his age group, everything Jude bought seemed to irritate his face due to alcohol and perfume (both of which he’s sensitive to).

At 14 his GP prescribed Lymecycline, but his dose and the length of time he was on the medication was restricted due to interfering with other medications.

Although this helped, as soon as Jude stopped taking them the cysts came back.

His mum, Sarah, suggested Clarol Silver Serum after seeing it online. It uses silver for an antibacterial effect, but the ingredient just kills certain bacteria that causes acne, rather than getting rid of the ‘good bacteria’ too.

The discovery came at a time when his spots were at their worst. ‘By December 2020, my forehead was absolutely covered with cysts. I had deep, headless, painful lumps that bled,’ said Jude.

‘As my acne got worse, I’d neglect to try and fix it since cleaning it was painful. It got worse and worse and it was a cycle that made me feel really awful about myself. During lockdown I lacked the willpower to keep fighting it.’

After three weeks of using the £12.95 cream the lumps had gone down, and he says that now – after three months – he’s receiving compliments on how clear his skin is.

Jude, who has spoken about his experiences on Instagram, said: ‘As we say in Yorkshire, I’m chuffed.

‘Obviously my skin is not perfect… yet, but it’s such an improvement and is continuing to improve every week.

‘Even my friends and family were making comments about how much my skin has improved. It has really made me feel happy. ‘

Mum, Sarah says: ‘I’m so happy Jude has finally found something for his acne he can rely on. I’ve bought him products for it before that have just been rubbish.

‘I love him so much and it makes me feel amazing to see how much happier he is now.’

Get in touch at [email protected]