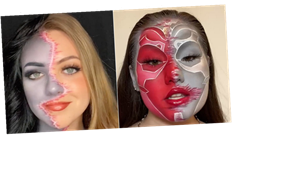 Disney+ officially released its Marvel miniseries, WandaVision, back in January, and viewers already can’t get enough of it. Tweets about the Elizabeth Olsen and Paul Bettany show have flooded our timelines for almost a month, and now members of the beauty world are even getting in on the fun.

For the uninitiated, the show centers on a couple, Wanda (Olsen) and Vision (Bettany), two superheroes living in a fictional suburb. Though, as the storyline progresses, we see that their lives aren’t exactly what they appear to be. Since the show’s premiere, dozens of TikTok users have created beauty looks inspired by the characters and cover art, and the videos are all so impressive that we’d really spend all day watching them if we could. To get inspired, check out some of our favorites ahead.