Colin Farrell completed his first ever marathon earlier this month, and he’s still going strong. Fresh off his victory at the Brisbane Marathon, where he crossed the finish line with a pretty damn impressive time for a newbie (and after only three months of prior training), the actor is back in Los Angeles and hitting the pavement again.

In a series of celebrity sighting photos, Farrell can be seen running shirtless, displaying the results of all that endurance-level cardio while rocking a colorful pair of Nike ZoomX Vaporflys. He also showed some serious leg in a small pair of running shorts, making him the latest proponent of #QuadSummer, following in the footsteps of other male celebs like Dwayne “The Rock” Johnson and Milo Ventimiglia who have bared their gams for all to see. 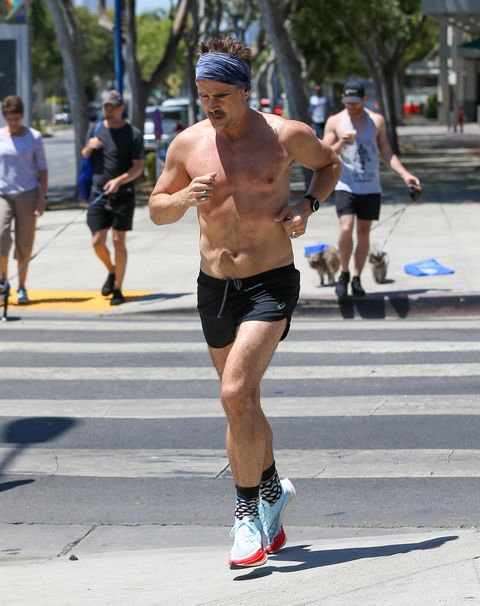 While it’s motivating to see Farrell running again so soon after running more than 42 miles in Brisbane, it should also be noted that it’s incredibly important to allow your body time to recover after a marathon.

“Start cross training three to four days after the marathon to get some blood flowing back into your muscles,” says running researcher John Davis. “Try jumping on a bike or in the pool. If you’re feeling good one week after your marathon, do some normal runs every couple days. After another week, transition back into your regular running schedule, but don’t plan any races or push your mileage too high for at least another month.”